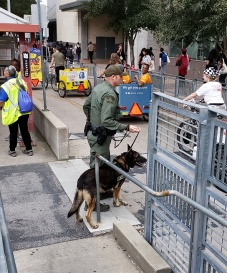 This year during SXSW, Capital Metro has deployed three K-9 teams to deter crime through random, unannounced searches and sweeps at our facilities and on our transit vehicles. The K-9s are trained to detect odors from materials and chemicals used to make explosives.

The dogs are well-traveled; they were acquired in Germany by the Department of Homeland Security for high-threat detail. Each is tasked with working large events in other states, like the Super Bowl or national political conventions, where crowds are expected. 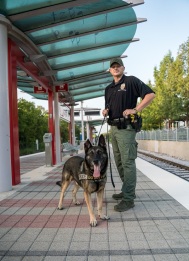 Capital Metro is utilizing the K-9 teams to provide a secure environment for our customers and event participants alike. We’re proud to feature the dogs and their partner officers from the Austin Police Department:

Jery, a male German Shepherd, has been in service for seven years, since the age of 2. His favorite treats are Greenies chews. Jery loves running and playing catch with his Frisbee.

Kan, a male Belgian Malinois, is four years old and has been in service since the age of 15 months. He enjoys treats of beef jerky, and playing with a Kong toy used in his training, as well as playing fetch with his Frisbee. When not working, Kan’s favorite thing to do is sleep on the couch at the ABIA Police Substation office. 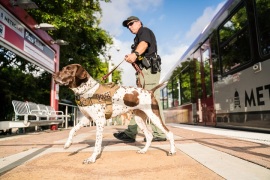 Rea is a female German Shorthaired Pointer. She’s been in service since 2010, and is now just over 8 years old. Rea’s favorite activity is running and playing catch with a rubber ball.